For Women Who Are Miserable At Work 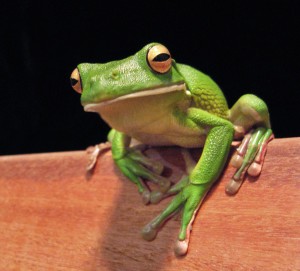 Why the frog? Keep reading … .

Jane was one of the millions of women who are miserable at work. She’s an intelligent woman who’d been successful in her corporate career. She’d made steady advances in the workplace, and was well paid, with lots of benefits and plenty of vacation time.

So why was she miserable?

She’d identified so much with the labels of wife, mom, manager that she had absolutely no idea who she was without the labels.

“What do you want for yourself, Jane?”

Her husband was doing his thing, the kids were gone — and no one wanted to hang out with a clingy, dependent woman who spent her time shopping for spiritual fulfillment after working all week at a job she didn’t want to do.

She was getting scared. Her health was beginning to go downhill. She wasn’t sleeping much. She had become a wee bit cranky.

Things were somehow supposed to be all better by now. Instead, they were getting worse.

Jane was feeling too old and worn out to deal with much of anything. It was all just too danged much.

Like the rest of us, she needed some help navigating the rough waters of what and who she didn’t want to be anymore.

Clarity, Confidence, and an Action Plan

As we worked together, she began opening herself up to new ideas, fresh experiences, and interesting people who were actually living the dream … not just wistfully thinking about it.

She wanted some of the good stuff, bless her heart. She gave herself permission to do some deep diving in our work together.

She wanted to feel as though she mattered, on her own terms. Jane needed to feel excited about her life again.

Jane realized she wanted to stop feeling tired, discouraged, and depressed. To stop being such a cranky, stressed out, frustrated, angry woman who was drinking too much so she could keep pretending that everything was OK.

She wasn’t living scared anymore. Instead, she started living from happiness.

It’s working out really well for Jane. Her new self-confidence, and trust in herself continues to affect her whole life. The tools, strategies and techniques she learned in the months we worked together will be useful the rest of her life.

Because I’m trained as a clinical psychologist, I’m not afraid of the deep, dark stuff. I know how to help you if too much stress, anxiety and/or depression are getting in the way.

Why the frog? It’s a fun way to tackle the yuckiest things in your action plan, from the book Eat That Frog! 21 Great Ways to Stop Procrastinating and Get More Done in Less Time.

I coach and counsel sensitive, passionate women who know they have more to do and give and explore, but don’t know how to break free of what’s holding them back.